Of Libraries, Flashbacks, and Alternate Realities 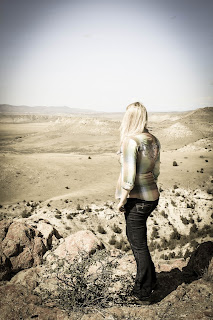 I will probably never be free from the memories. No situation or activity is safe from the flashbacks, the comparisons, and the wonder that things were ever so dysfunctional for child-me and that they're so normal for my own kids.

Yesterday we went to the library for a presentation on Mt. Everest. The local university took an expedition to the top in 2012, and they put together a great video presentation for kids on geology, culture, and the amazing feat of scaling the world's tallest mountain.

In the middle of it, somewhere between talking about tectonic activity creating the Himalayans and the sacred ceremony and prayer flags the monks performed for the climbers, I had one of those weird disconnecting flashbacks that happen every so often. Like I'm suddenly an observer of an activity I remember taking part in in the past, and the one I'm taking part in in the present, watching from the outside.

I suddenly remembered being a child and going to presentations at the library. Or the IMAX. Or the Science Center in Seattle. Or a museum. We often went to such educational things. My mom thought we would learn best by experience and exposed us to more than a few really cool educational experiences.

I remembered being uncomfortable as a child every time something science-y was brought up. The words "millions of years ago" would produce an instant disconnect in my young mind. We were trained to hear those words and disregard them from a very young age. We'd usually get a talk in the car on the way home about how "the world" thinks that the earth is millions of years, but we know better and Everest has marine fossils on the top of it because of the Flood, not because of tectonic uplift (which we were told was made up by "evolutionists" who deny the Bible). Geology talks were a waste of our time and I learned to shut them out, as if the words themselves had power to deceive and I needed to be on the alert.

"Multi-culturalism" was always portrayed as a bad thing. Or joked about as ridiculous. I can't remember anytime in my childhood those words were spoken of in a positive way. Adding other religions and their practices to the conversation only made the speaker more our enemy. As a child, talks of prayer flags and Tibetan monks offering sacrifices to the mountain was very uncomfortable. Not just while sitting there, but also nervously anticipating the talk my parent(s) would give later about how we don't accept that and how wrong it was and how I needed to be sure to respond correctly so they knew I didn't believe a word of it.

And I came back out of those flashbacks as I sat there, an adult, in our library, listening to the person teaching my kids about tectonic activity, geology, and Buddhist ceremonies and so many emotions flooded over me.

Relief. Because my children will never know what it's like to be so foreign to the world they live in. They sat there, soaking up the information, never once worrying that they were being deceived by Satan and the world, never worrying I was going to lecture them about the truth, never scared that they have questions they're not supposed to ask, never feeling like an outsider with an alternate narrative of reality, unable to engage in their world because they're not a part of it.

Frustration. Because child Darcy deserved better. Because I'm 32 years old, in charge of my own life, yet the scars of my past will always be there, showing up in the strangest, most unexpected places. The childhood that formed me, formed me thoroughly and I cannot shake it because it is who I am. Frustration because there are children still being raised with this kind of psychological and spiritual abuse who will one day be adults unable to attend a kid's library presentation without their past smacking them in the face.

Hopelessness. Because my parents will never understand the depth and severity of what they did. The consequences of the choices they made. What was a phase for them was my entire childhood, my most formative years spent in one of the most toxic environments on earth. The lasting effects indelibly imprinted on every cell in my body. They call me bitter and unforgiving. They excuse themselves with "we had good intentions". They say I'm making a big deal out of nothing and need to move on. But they don't sit in a library and have flashbacks. The fact they can call all of this, all of what made me, all of what I deal with on a daily basis because of their choices "nothing" says a lot. I think we will never be able to connect because of this. Even outsiders don't understand. The only ones that get it are the ones like me. The walking broken, the walking lost, the homeschooled impostors who struggle to find normalcy and belonging and peace.

And yet, also hope. Happiness. Thankfulness. Amazement. Because my kids are being raised so.....normal. They'll have a solid foundation from which to choose whatever life they want. If they want to be weird and different in any way, they will be able to freely choose that. They'll know what it's like to be part of the community and world that they live in. To not be an outsider because they're supposed to reject everything about "the world" and own a different reality. To not have a different history, science, and social narrative than everyone else around them and the insecurity that comes with it.

I hope they someday sit in a library with their kids and only remember with fondness the awesome time they had learning about Mt. Everest.