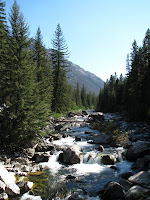 We keep hearing about women's and men's "roles" and who is and who is not following them correctly. We hear the phrase "Biblical roles" thrown about here and there. But a question keeps forming in the back of my mind:

Why would I want to play a "role" in my life and relationships?

Roles are for actors....people who are handed a script and told "Here is your character, your role in this play; do not stray from the script, ad lib, or get out of character. To do so will ruin the entire play and throw the other actors off. Stay in your role, perform it well, and everyone else will stay in theirs, and all will go well."

Is that how I want to live my life? To be handed a script with my role as "Godly Woman" printed on it for me to follow? A character I must stay in, a role to play? Interacting with other characters whose scripts have been handed them, never knowing who they truly are, but only who their character is?

What if all the people I love stop following their "roles" and start living day by day, finding out who God designed them to be, instead of playing a role given to them by church, tradition, and interpretations of ancient literature? What if life isn't a play, perfectly scripted, with perfect little actors playing their roles, interacting with each other accordingly, and making the time pass?

I am more than a script on a piece of paper...more than a role in a play. I am more than an actor in my life...someone following another's script, pretending to be something I'm really not. When God designed me, He didn't give me a role to play, He gave me a life to live. A life that is full of twists and turns and suprises and consequences, some mine, some not of my own doing. I have a choice in how I live and conduct the relationships in my life. God didn't hand me a script and say "this is your character; play this role". He gave me a life and said "Choose".