Parenting Beyond Religion ~How I Answer the Difficult Questions 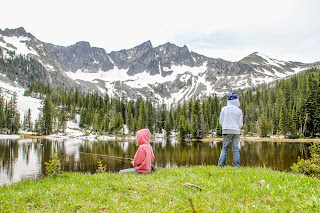 I have a lot of people ask me these days, "how do you parent without religion? How do you talk to your kids about why we don't go to church anymore? How do you explain your beliefs to them? How do you answer their questions?"

These are interesting questions, usually asked by other ex-Christian parents who are struggling with the idea that all the answers they used to have have been pulled out from under them. "For the Bible tells me so" is no longer the answer to everything from "why is lying bad?" to "what happens when you die?" Suddenly, we're forced to think deeper, to be purposeful, and to challenge ourselves. We don't get to play the God card anymore.

I can't speak for everyone who has been through the deconversion process with their family, but I can explain my own experiences and how I've approached parenting differently these days.

In the beginning of our journey, about 3 years ago, we left a toxic church. This was difficult for my kids, who were very young, because it meant losing their friends and social group. Even though we tried to stay in touch with those whom we were close to, it's just not the same when you don't see them 3 times a week and don't share the beliefs they hold dear. ("Friendship by proximity" is what my friend Sam called these relationships, not implying that they aren't genuine but that they are upheld by proximity, as are many other friendships, such as from a job or other social group). They missed the children's church and the potlucks and the singing and activities. They also missed the routine. They asked a lot of questions about why we don't go to church and why we can't go see some of their friends anymore. I avoided these at first, because I was hurting from betrayal and rejection and seeing my kids' pain and confusion was just another knife in my heart. I also just didn't know how to answer them, to explain that I still believed in God, but had no idea what else I may or may not believe it. That I wasn't sure where I was going on my own spiritual journey. And how do you explain things like triggers and panic attacks due to my past to children? Eventually though I had to be honest and explain as best as I could.

That first conversation, initiated by my daughter, K (who was 7) went like this:


Me: "K., we had to leave that church because we  were no longer welcome because we disagreed with some things they were teaching that we feel are wrong and hurtful. We haven't found another church that doesn't teach these wrong things so we decided to stay home and do fun family things instead."

K: "Like what kind of bad things to they teach, Mom?"


Me: "Well, like that women can't do things just because they are women....."


K, interrupting: "What?! That's stupid. That's an Old Times belief. Girls can do and be whatever they want today, so can boys."


Me, suppressing a smile: "Yes, but the church we left didn't believe that, didn't like that we believed something different, and we didn't want to raise our kids in a church that tells boys and girls who they must be and how they must act because of their gender."


That was the beginning of a series of conversations that we had about a few beliefs that I didn't think were healthy and that were keeping us from church. I kept it as simple as I could and they haven't asked about church in a long time. Their lives are now full of school and friends and family adventures.

Recently, they've begun to ask deeper questions about God, life, behavior, values, afterlife, science, and philosophy. These have been interesting for me, and, I admit, scary as it is completely new territory. Whereas before I would answer "we don't lie because it is sin", now I have be more thoughtful and pragmatic in presenting my values and ethics to them. *I* have to understand the "why" before I can help them understand.

When asked point-blank whether God exists or not, I have explained various viewpoints, including other gods and goddesses in the list of "what people believe". I am very honest in explaining that we cannot prove that any god exists, but that people chose to have faith in one god or many, for many different reasons. I try to stress the difference between scientific proof/knowledge and faith, and how these things are compatible and how they are not. I often answer with "this is what we know and can prove, this is what we don't, this is what some people believe" and asking them "what do *you* think?" Because someday they're going to choose for themselves what they believe and I have no desire to dictate that to them. Not by conditioning them now while they are young or prejudicing them toward or against one belief system or another. I care only that they are good, strong, ethical people, who are critical thinkers and intelligent, not that they worship Jesus or Odin or no one.

Kids are smart and vastly underestimated. Kids who aren't told what to believe, who aren't scared by hell fire into accepting a system they are too young to understand, and who are taught how to think are really fun to have deep conversations with. They know they can ask me anything and I'll answer them as honestly as I can and have no problem saying "I don't know, what do you think?". I have no agenda to make sure they have The Right beliefs or none at all. They are and will always be free to chose any faith or none, THAT is the gift I want to give them now as I raise them to be free-thinkers. It was not a gift ever given to me as a child. The only thing that would ever disappoint me is if they chose a faith system that devalues them and other humans. And yet, I'm not all that worried. They are strong thinkers, science-minded, emotionally healthy, with hearts full of discovery and empathy. I could be wrong but I can't see them throwing out those instilled and natural values, but rather bringing them into whatever faith they choose.

Raising thinking children means being a thinking parent. It means no cliches, no pad answers, no dismissing. This is really hard, not gonna lie. It goes against everything I once was and once believed. It's meant re-training my habits and reactions and thought-processes in order to be more true to myself and more honest with my kids. It means being fearless in my thoughts and my answers to their questions, being vulnerable, being uncomfortable, admitting wrong, being honest and open. But I find myself at peace with the relationship I have with my own beliefs and with my children. This is a journey, one I'm sure we'll be on for a long time yet. But we're on it together, forging a connection and trust, even if I don't always know how to answer their questions.

And, really, that's the most important thing.
Posted by Darcy at 1:47 PM 14 comments: