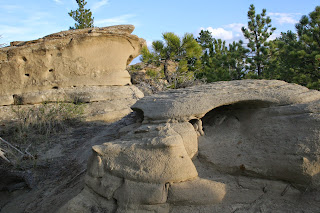 I'm having a difficult time with this concept. I know in my world, it meant "you nicely forget everything bad that was done to you and never bring it up again or treat the other person different because, they're forgiven. As far as the east is from the west." It was like the magic eraser of all wrong-doing. And you didn't have a choice in the matter. If you didn't forgive someone, God wouldn't forgive you. You'd allow a "root of bitterness" to spring up in your heart, "give the Devil a foothold" and suddenly Satan had a stronghold in your soul from which he could reign terror over your life. Didn't matter what the offense was, they were all equal in the sight of God and all needed to be forgiven and you certainly aren't perfect so who are you to withhold forgiveness and cast stones. That one time I lied pretty much negated any right I had to be angry at my sister for stealing from me or angry at my mom for manipulating me. Being angry at someone who sinned against you wasn't allowed because that meant you hadn't truly forgiven them. Remembering what they'd done and avoiding them or treating them differently because of it wasn't true forgiveness either.

No matter how much I try, I cannot help but see the concept of forgiveness as a means by which you enable people to hurt you. A means that abusers and toxic people use to control you and be sure you never talk about what they did to you. All wrapped up in a neat package with the label of "For The Bible Tells Me So".

Since becoming an adult, I have only seen forgiveness used to hide serious evil against other human beings. Abuse of every kind is covered up by the world "you must forgive them". And victims are silenced and suffer alone, feeling like they are the ones who failed when they cannot help but be angry or sad at how someone has treated them. They are not allowed to be angry at someone who abused them because "no one is perfect".

As far as I can tell though, forgiveness from a Judeo-Christian perspective, as far back as the Old Law, was not anything like what the church preaches today. It was really more of a legal definition. That whole eye for an eye thing? It's talking about natural retribution. Payment for a debt owed. If someone hurt you or stole from you, they owed you and you had the right to retribution, to make them pay. Forgiveness was about debt. Not about saying "it's OK, I'll forget this ever happened and we'll all feel loving again". No, it was more like, "I will not enact retribution for this action. I will not take what is owed me." Now that I can get behind. ('Course Christians claim that Jesus came along and changed all that and that's where it gets a little murky in the area of definitions and practicality.)

And yet....some actions demand retribution. They demand a debt be paid. This is how our legal system works. You kill or steal or destroy, you pay. It's how all human institutions have functioned throughout all history. Wrong-doing demands retribution. Whether or not a person chooses to forgive that debt that is owed, and how they choose to do so, is completely up to them. No one can demand that from them. And it has nothing whatsoever to do with forgetting what was done or demanding that someone not feel a certain emotion for it or treat the evil-doer as they would someone who had not enacted evil against them. This is not only unhealthy, it is dangerous.

I am so sick and tired of people playing the forgiveness card. The manipulation is disgusting. And the control that it has over so many people thanks to religion is abhorant. "Forgive" a child molester? Um, no. That's a debt that legally must be paid so others are protected. Whether the child demands retribution for that evil against them or not is up to the child and does not affect how the rest of the world treats a person who commits such atrocity.

People need to stop hiding behind the modern Christian view of forgiveness, stop trying to coerce people into shutting up for Jesus. Stop telling children that if they feel revulsion and hatred for a person who molested them then God won't forgive them and their lives will be ruined. That kind of forgiveness can never be a choice. It will always be coercion. Those kids who were abused deserve to enact retribution. They deserve to feel whatever they want to feel. They deserve to say "No, I don't forgive you for this pain". And they deserve the choice of when or if any amount of release of that debt happens in their own hearts, regardless of what justice must be enacted on their behalf.

We deserve to be angry. To be filled with rage. To not let abusers off the hook because they pulled the forgiveness card. We deserve the choice to determine how we handle wrong-doing against us....without coercion or guilt-trips or religious platitudes. We should not be told that we cannot judge an atrocity because "he apologized"and "you're not perfect either". (One nice thing about not being a christian anymore is that I don't have to believe that the one time I stole five dollars from my dad is just as bad as Josh Duggar molesting his sisters. Judge him I certainly will.)

And the next person who tells me "let he who is without sin cast the first stone" is going to get some rocks chucked at them.
Posted by Darcy at 9:43 PM 25 comments: