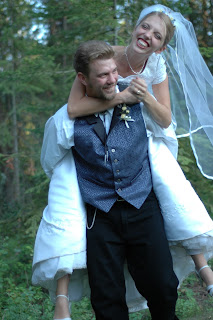 .....a girl, barely a woman, who knew nothing about this thing we call "life", yet so sure she didn't want to know if he couldn't be part of it.

....a boy, though mostly a man, also knowing nothing about life though thinking he did, just knowing for sure she made it better.

....two people, broken, young, with wounds they didn't yet know existed, with ideals and plans and dreams and rose-colored glasses.

....two people promising til death do them part....promising so many things they didn't understand and if they did, they probably would've hesitated to make such rash promises they didn't know would be so difficult to keep.

I see them...us... standing there, looking at each other, so much love filling and overflowing and pouring out onto everyone who watched. We were stepping out in faith as much as in blessed ignorance. For us, love was enough for whatever came.

But we were wrong. Love wasn't enough. Oh, it was a huge help, probably the strongest link in the chain that has held our lives together. But also needed was strength, courage, anger, hope, faith, determination, commitment, honesty, humor, and devotion. Sometimes I think sheer stubbornness has gotten us through more tough spots than love has. And yet, without the love, what is the point of being stubborn? What is the point of fighting and hanging on when everything seems hopeless unless there is love worth fighting for?

Sometimes I think we've aged a lifetime in the last 8 years. Sometimes I think we're still broken, lost kids, reaching out for each other and the acceptance we received each from the other. We've saved each other, in a way. We helped heal each other's brokenness as much as we've helped create new wounds and slash open old ones. We've walked together, we've walked apart and lonely; we've helped and hindered, built up and torn down; we've clung to each other and pushed each other away; we've loved deeply and passionately and we've hurt and forgiven so many times. Can two people really live a lifetime in 8 years? I think so. But ask me 8 more years from now. Ask me when I grow up just a little bit more.

Marriage was not what I expected. It's been so much more. More joy, more pain, more love, and more sorrow than I ever imagined. You don't enter into someone's heart and life and deepest soul and come away untouched. You don't give everything you have to one person and not be changed forever. I think we have a pretty good understanding of "for better or for worse".

And here's to the man who won a young girl's heart a lifetime ago and gave his own in return. Perhaps we were naiive then and now we are wise. But wisdom hasn't changed the fact that we would make the same decision now as we did then. To each be a witness to the life of the other.....to walk together.....to dream together.....and to love together.